Dated: Wednesday, October 27, 2010
PRESS RELEASE | INVITATION
Contact: MikeGhouse@aol.com
You are invited, details below
Ever since we declared our independence, we have been tested time and again by various political, economic and religious forces to divide us, however, at the end we have come out strong as one nation. The Civil War, the Great Depression, the World War, Pearl Harbor, Women’s rights, Abortion, the Vietnam War, Civil Rights, Budget Deficits, Unemployment, 9/11, the Iraq and Afghanistan War have all been difficult, but we will make it through and sanity will prevail.
The controversy over the Muslim Community Center in New York has unraveled the difficulties Catholics, Jews, Mormons, Wicca and others have endured.
We have come a long way to embrace and accept the otherness of other. However, this year has given rise to yet another temptation; to blame Islam, calling it an evil, evil religion and calling its prophet a false prophet. No American has to live in fear of the other, nor live in anxieties or discomfort.
Religion has been “abused” and “misused” to someone’s advantage, as Americans, are we going to let that happen? No, we can pull ourselves together and not fall for the temptations to divide ourselves.
Goodness will come to our rescue, if we make an effort.  Mike Ghouse adds, “As members of diverse family of faiths, we seek to demystify the myths, malice and falsification of our respective faiths. It is time for all of us to gather and understand the Qur’aan, the holy book of Muslims, which has been the subject of attack by a few among us. Indeed, a conference is a positive response to negative sermons delivered from a few pulpits of America this year.”
The Conference puts a Quraan in the hands of panelists made up of Pastors, Rabbis, Pundits, Shamans, Clergy, lay persons, elected officers and the public. The uniqueness of the event is highlighted by facing the “terrifying passages” of Quraan.  For the first time in history, the actual verses  from Quraan will be read directly and explained by panelists made up of Pastors, Rabbis, Pundits, Shamans, Clergy, lay persons and elected officials who have a deep interest in bringing Americans together on common grounds.  The Muslim scholars either affirm their reading or share the additional information right from the very Quraan for further understanding.
It is time now to replace the ill-will with goodwill; no American has to live in anxieties, discomfort or fear of the other. The purpose of this conference is to remove such myths in an open forum in the public and restore the cohesiveness of our society and work towards building a safe and secure America.
Bring your children to experience the multi-cultural costumes in a designated room for them.
Refreshments will be served after the event.
THE EVENT IS FREE
Event: Qur’aan Conference in Dallas
Purpose: To demystify the myths about Quraan and Islam
When: 3:00 PM – 6:00 PM on Sunday, December 5, 2010
Where: Unity Church, 6525 Forest Lane, Dallas, TX. 75230
Website: http://www.quraanconference.com/
Inquiries: quraanconference@gmail.com
RSVP: Confirmattendance@gmail.com
Call: Mike Ghouse (214) 325-1916

Thank you.
Mike Ghouse for
A COHESIVE AMERICA,
AMERICANS TOGETHER
http://www.quraanconference.com/
Posted by Mike Ghouse at 1:43 PM 1 comment: 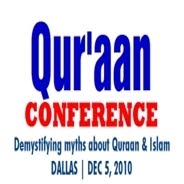